Padre Pio Comes to the Diocese of Gallup

Relics of Saint Pio of Pietrelcina – better known as Padre Pio – will resume touring several Archdioceses and Dioceses in the United States of America from May 1st to June 15th (first part), and from September 15th to November 15th, 2019 (second part). The relics will also be touring in Canada. The 2019 tour follows the last two years sensational and headline-making tours that attracted an estimated of more than 500,000 faithfuls.  In addition, some of the most important secular media covered this event, including FOX NEWS, NBC, The Wall Street Journal, and The New York Times, to mention just a few.

The relics will be visiting the Sacred Heart Cathedral of the Diocese of Gallup,
on Saturday, November 9, 2019 (from 9 a.m. to 7 p.m.). A Mass in honor of St. Pio will be celebrated at 8 AM 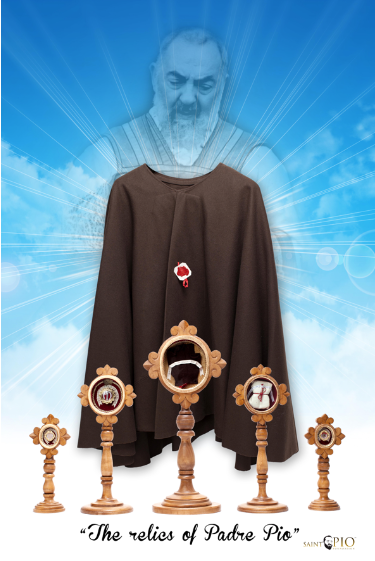 A mass in honor of Saint Pio will be celebrated at 8 a.m. The Saint Pio Foundation, which is sponsoring the tour, will provide books and items related to Padre Pio in the entryway of the Church.

St. Pio was born on May 25, 1887 in Pietrelcina, Italy, and baptized Francesco Forgione.  He first expressed his desire for priesthood at age 10. In order to pay for the preparatory education, his father, Grazio Forgione, emigrated in the United States on 1899, where he worked for several years.

The future saint entered the Capuchin order at age 15, taking the name Pio. He was ordained a priest in 1910 at the age of 23. During his lifetime, Padre Pio was known as a mystic with miraculous powers of healing and knowledge, who bore the stigmata.  Stigmata is the term the Catholic Church uses to speak about the wounds an individual receives that correspond to the crucifixion wounds of Jesus Christ.  They can appear on the forehead, hands, wrists, and feet.

His stigmata emerged during World War I, after Pope Benedict XV asked Christians to pray for an end to the conflict. Padre Pio had a vision in which Christ pierced his side. A few weeks later, on September 20, 1918, Jesus again appeared to him, and he received the full stigmata. It remained with him until his death on September 23, 1968.

In the Catholic Church, relics are physical objects associated with a saint or candidate for sainthood – part of the person’s body or something with which he or she was in contact. Relics are not worshiped but treated with religious respect. Touching or praying in the presence of such an object helps a faithful individual focus on the saint’s life and virtues, so that through the saint’s prayer or intercession before God, the individual will be drawn closer to God.

ABOUT THE SAINT PIO FOUNDATION

Do I need a reservation?

Nope! Feel free to come by the Cathedral at any time from 9AM to 7PM. Be aware that there may be lines, but there will be seating available for those who need it.

Can I leave prayer intentions?

Yes! You will have the option to write down prayer intentions, which will then be sent to the St. Pio Foundation.